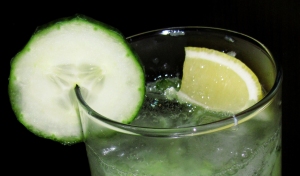 How can one person connect the Cool Collins cocktail to Michael Jackson’s virginity in six simple steps? Watch and learn!

Sometimes I wake up and think, “Today is a Cool Collins day.” After all, that’s my Grumpy Old Man cure, with its citrus charm (I use 7-Up or Sprite, instead of soda) and pleasant presentation (muddled cucumbers, yo!). I love the Grumpy Old Men movies, starring Jack Lemmon and Walter Matthau, one of the best comedic duos of all-time. Matthau also played one of my favourite drunks (look out for an upcoming post on this amazing selection of characters) Morris Buttermaker in The Bad News Bears. In that movie, Buttermaker enlists the services of his ex-girlfriends daughter, Amanda Whurlitzer, to pitch for the hapless team. That youngster was played by Tatum O’Neal, who is the youngest person to ever win a competitive Oscar, for her role in the movie Paper Moon. And here’s where things get interesting (as if you’re not enthralled by this connect-the-dots puzzle already): she once dated the ‘King of Pop’ Michael Jackson, who has claimed that O’Neal was his first love.

The game is even more fun when you’ve already had a couple of these cocktails! So here’s my adaptation of a Tom Collins:

This is an awesome drink in the summer, but can definitely be rocked in the winter months, as well. Let me know what you think and come back tomorrow for another great recipe. Enjoy!

Sip Advisor Bar Notes (4 Sips out of 5):
I’m a huge Tom Collins fan and today I tried to change the recipe up a little. The muddled cucumbers along with the Hendricks Gin gives a great taste of cucumber throughout the drink, which while a mild flavour, has also been an enjoyable one for me. My choice of Lemon-Lime Soda over Club Soda is also an excellent decision.